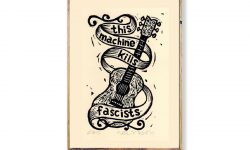 Grazie mille to music blog Libro Musica for the post about “Color Line,” my latest release! The song is a co-write between myself and Woody Guthrie, who penned the lyrics back in 1950 in response to the blatant racism of his then-landlord, Fred Trump. The lyrics were unpublished until 2016, and upon reading them, I was struck (and dismayed) at the uncanny resemblance between the Trump Guthrie knew and our current President-elect.

“I love that artists like Marina Evans, use their talents to share a message that will help to promote, shape and inspire listeners to create social change. This message about the dark days of our past helps us to prepare for the future.”

You can stream the song online for free, but if you choose to purchase/download the song, please remember that ALL proceeds from sale of the digital track will be donated to the Woody & Marjorie Guthrie Fund at the Huntington’s Disease Society of America. Woody Guthrie passed away from Huntington’s disease in 1967 and we are still working towards a cure for this fatal illness.

BIG news: I have signed my very first co-write agreement with non other than… Woody Guthrie! I humbly submit to you Color Line, lyrics by Woody Guthrie, music & new lyrics by yours truly. The beautiful arrangement you’ll hear is thanks to producer Bernardo Baglioni (as some of you may have guessed). To listen, click the player below or click here!

This may seem strange, as Guthrie left this earth quite some time ago. But like many of Guthrie’s works, these lyrics and the subject of the song are very much of this moment in American history, despite the 50+ years they have been gathering dust. So let’s start from the beginning.

In 1950, Woody Guthrie signed a lease on an apartment in Brooklyn, NY. The public housing complex, one of many that received federal loans & subsidies in the postwar years, was owned by Fred Trump, Donald Trump’s father. Soon after moving in, Guthrie began penning lyrics lamenting the fact that the equal opportunity the public housing initiative was supposed to afford was not, in fact, equal. Blacks were turned away, told the housing was full, or discouraged by falsely inflated rents. In his lyrics — unpublished until earlier this year — Guthrie holds Trump personally accountable for the racist rental policies employed at his properties:

The accusations made in these bitter lines were later confirmed in various legal proceedings against the Trump real estate empire. The most damning evidence came from Trump’s own employees, who testified that rental applications for Trump properties were indeed coded by race, and that doormen and supers were encouraged “to decrease the number of black tenants… by encouraging them to locate housing elsewhere.”

I came across these lyrics in an article published by Will Kaufman, the scholar who discovered them, in January of this year. And I was absolutely stunned by the uncanny resemblance between Guthrie’s depiction of Trump senior and his son, the 2016 Republican nominee for President of the United States.

Reading the lyrics, I heard a melody immediately. Their prosody, their urgency… they needed to be released. I picked up a guitar, hummed the melody, edited Guthrie’s original lyrics, and added some of my own. It took quite a while to reach an agreement with Woody Guthrie Publications for usage of the lyrics, since they had never been published before and I was among hundreds of songwriters seeking to use them. But now here we are, just a few days before this crucial (unbelievable) election, and a signed co-write contract found its way to my inbox.

100% of my proceeds from sales of this track will be donated to the Woody & Marjorie Guthrie Fund at the Huntington’s Disease Society of America. Woody Guthrie passed away from Huntington’s Disease in 1967, and we are still working towards a cure for this fatal illness.

I hope I have done some justice to Guthrie’s legacy with this project. I hope Guthrie’s original intent carries across the decades to this critical moment in our nation’s history. I hope each and every one of you votes on Tuesday (not to worry – my absentee ballot is IN). And I hope that on Wednesday morning, as dawn breaks over the big, beautiful, protean experiment that is America, we wake to a brighter future.

See you on the other side,
Marina

Children dying in the desert
He says: Build a wall
He draws his hate line in defiance
Of God and man’s law