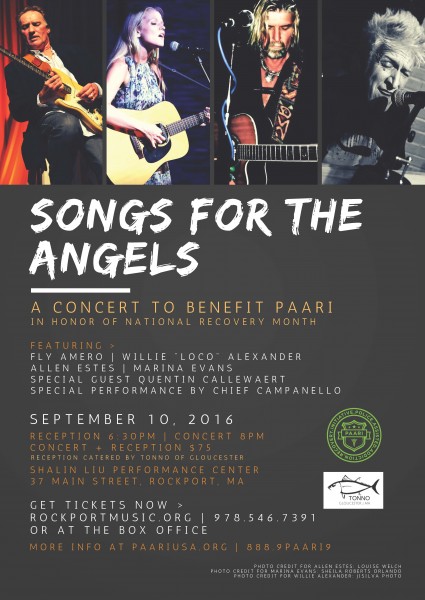 During National Recovery Month, the Police Assisted Addiction & Recovery Initiative (PAARI) is hosting an exciting benefit concert featuring Cape Ann’s favorite singer/songwriters. Songs for the Angels will showcase Cape Ann’s vibrant music scene — represented by singer/songwriters Fly Amero, Allen Estes, Marina Evans, and Willie Alexander, and introducing opener Quentin Callewaert, plus a special performance from Chief Campanello, among other surprises. All will come together for the crucial cause of fighting addiction, both in our local community and across the nation. Held in the stunning Shalin Liu Performance Center in Rockport overlooking the Atlantic Ocean, this promises to be a one of a kind concert for a very important cause. You won’t want to miss this one!

The concert will support the Police Assisted Addiction & Recovery Initiative (PAARI). In 2015, Gloucester, Massachusetts Police Chief Leonard Campanello and John Rosenthal developed a revolutionary new program aimed at getting opioid drug users the help they need, instead of putting them in handcuffs. PAARI’s mission is to support the Gloucester Police’s ANGEL initiative and to aid other police departments to implement similar programs. PAARI-committed police departments share a common mission: Encourage opioid drug users to seek recovery; Help distribute life saving opioid blocking drugs to prevent and treat overdoses; Connect addicts with treatment programs and facilities; and Provide resources to other police departments and communities that want to do more to fight the opioid addiction epidemic. In just over a year, PAARI has grown into a network of over 150 police departments across the country. PAARI works to remove the stigma associated with drug addiction, turning the conversation toward the disease of addiction rather than the crime of addiction. We work directly with over 200 treatment centers to secure fully-funded scholarships for participants with or without insurance.  For more information about PAARI, please call PAARI at (888) 9-PAARI-9 or visit paariusa.org.

September 11 and 12, 2015: Marina is honored to be supporting legendary songwriter, author, painter, and activist Judy Collins for two sold-out concerts at the stunning Shalin Liu Performance Center in Rockport, MA!

With an incredible catalog of 50+ albums, Collins has been a leader and inspiration for songwriters and activists the world over since the 1960s. She has earned several Grammy Awards, and has released multiple gold- and platinum-selling albums. Known for her mellifluous voice, unparalleled artistry and musicianship, and her creative interpretations of traditional and well-known songs, Collins is an icon who has long been an important influence on Marina’s music and career.

In fact, the best way to explain her feelings on supporting such a folk legend, Marina feels, is to quote one of Collins’ own lyrics (!):

In celebration of the 25th anniversary of the North Shore Health Project, a leading agency for HIV and HCV support in Massachusetts, Rockport Music has put together a benefit concert at its gorgeous Shalin Liu Performance Center on October 17, 2014. And I am thrilled to be a part of it!

Cape Ann singer-songwriters Allen Estes, Fly Amero, Brian Alex, myself, and other special guests will open up the show with an in-the-round set of original music. Our set will then be followed by renowned folk songstresses Antje Duvekot and Meg Hutchinson, whose gorgeous voices, melodies, and lyrics are not to be missed! 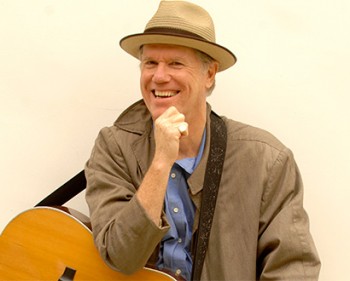 BIG NEWS, everybody: I am thrilled to be opening for folk legend Loudon Wainwright III on Sunday, July 27 at the gorgeous Shalin Liu Performance Center in Rockport, MA!

With a stunning stage suspended over the waters of Sandy Bay, the Shalin Liu represents the leaps and bounds by which grassroots music organization Rockport Music has grown in recent years. As a little kid sitting cross-legged on the floor of the Rockport Art Association, flipping through a chamber music concert program, I never would have imagined that one day my name and face would appear on those glossy pages. And I certainly couldn’t have imagined that the plywood stage resting on that dusty floor would one day grow to a state of the art performance space.

Needless to say, this is an enormous honor and a highpoint of my career thus far. I am also very much looking forward to sharing my set with the talented David Brown on dobro. I am so grateful to Rockport Music and to Mr. Wainwright for offering me this incredible opportunity! Please, join us!

A singer-songwriter of immense depth and wit, Loudon Wainwright III has been thrilling audiences with his sharp, literate take on the folk tradition for over 40 years. From the “next Dylan” tag of the early 70’s to his evolution into a revered cult figure and Grammy-winning folk elder statesman, Wainwright’s singular talent has never dimmed.

Wainwright’s career has been that of a slow burn rather than a firecracker. His critically-adored records, beginning with 1970’s Album I, helped the songwriter gain a devoted cult following. Wainwright’s rapier wit, self-deprecation and often darkly cynical take on the human condition combined with his strident vocals and deft finger-picking guitar skills spawned a whole new generation of singer-songwriters to follow in his wake.  With high profile song appearances in recent hit films like Judd Apatow’s Knocked Up, Wainwright has enjoyed a resurgence in his career and introduced his songs to a new, younger audience.

“Mr. Wainwright wrings more human truth out of his contradiction than any other songwriter of his generation.”
– The New York Times

“…one of America’s most astute lyrical commentators…lyrically compelling and emotionally overpowering.”
– Mojo Magazine

I am super excited to share with you all a video that’s very close to my heart: a solo acoustic performance of my song “California,” filmed at the gorgeous Shalin Liu Performance Center in my hometown of Rockport, MA! It has long been a dream of mine to perform on this beautiful stage, with the backdrop of Sandy Bay. So, naturally, I was THRILLED to hear from Henry Cooper of Granite Visions (who produced the video) that he and his team were interested in putting together an interview and a couple of live performance videos. Many, many thanks to Henry and Granite Visions for their support and hard work! And stay tuned: more videos to come!