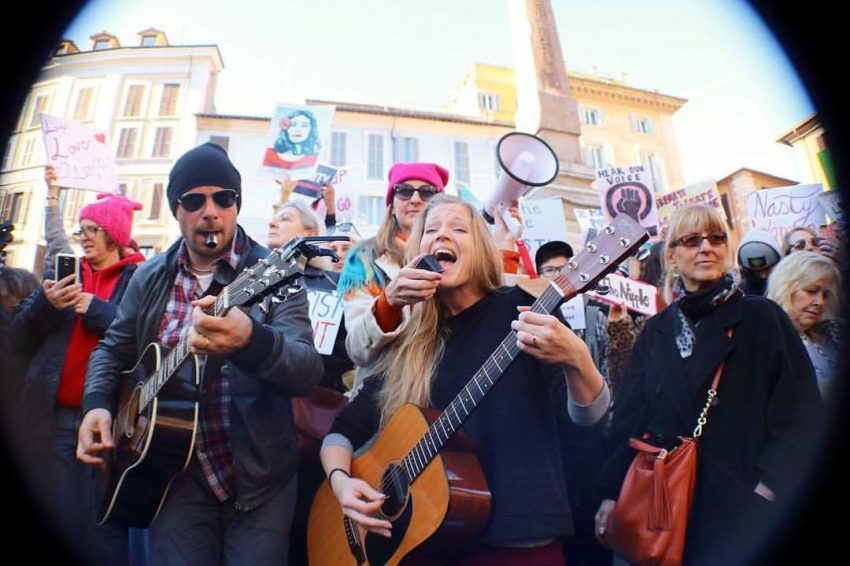 On Saturday, January 21, Marina was honored to lend her voice & songs to the Women’s March in Rome, Italy! This was one of hundreds of “sister marches” to the Women’s March on Washington that occurred across the globe. Millions of people joined together across borders and oceans, across racial and gender and religious and economic lines, to call for JUSTICE and EQUALITY for all people.

In the folk tradition Marina strapped her guitar to her back, traveled to Rome, climbed the steps of the fountain facing the mighty Pantheon, and performed songs of protest, of peace, and of social justice — both her own original compositions, as well as some resounding crowd favorites (“Down by the Riverside” and “Amazing Grace”). Joined by guitarist and mandolin player Bernardo Baglioni, Marina started off the set with her most recent release, “Color Line (Old Man Trump),” an uncanny co-write with Woody Guthrie on the evils of the Trump dynasty (click here for the full story on Woody’s lyric & Marina’s song). She followed that with her song “Turtleshell Eyes,” a rumination on the persecution of women in the Middle East inspired by Azar Nafisi’s book Reading Lolita in Tehran. She ended her first set with “One Way or the Other,” another original song about overcoming adversity in the face of power.

The energy was tangible in that ancient square, in the imposing shadows of the Pantheon. Voices jilted and mingled and harmonized in chants and songs. Colors blended and slogans of hope, of resilience, and of defiance danced in the air.

“Today’s gathering of souls was much needed,” Marina said, “particularly for those of us who, being far from home, feel isolated or helpless in the face of recent events. It was heartening and inspiring to join together in song, fists raised, hearts full — but the freedom to gather and protest in this way is in itself a precious thing. Our liberty is a blessing, but it is also a responsibility: a responsibility to give voice to the voiceless the world over, to protect and defend those who are not free to do so themselves.”

Marina ended her set with a new original song, “Blessed Burden,” inspired by the refugee crisis that started in Europe and has now expanded the world over. Here’s a selection of the lyric (listen & read full lyrics here):

And hold each other tight and near

The dark, the anger, greed, and fear

In a sea of stars

And whether we are gonna make it

Is a question of heart…