I walk through a brisk London evening, head bent against the rain, my steps uneven with the weight of my guitar. Pavement turns to cobblestone and I’m on a funny curvy little street: there’s a French bistrot with a cardboard sailor cutout in the window, a dark, warm-looking pub called The King’s Head, and a misplaced kiosk selling cell phone parts (what?). After a couple more corners and awkward intersections (I inevitably look the wrong way for oncoming traffic) I reach the beautiful, carved door of The Troubadour. 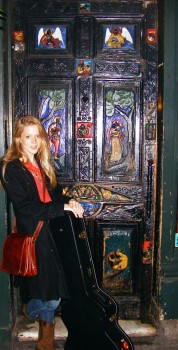 The air inside is warm and humid with loud conversation and piles of raincoats. People crowd around tiny round tables, shrugging into corners, accidentally blowing out candles. From the heavy wooden beams above, old banjos and fiddles hang alongside iron frying pans and rusting farm tools. It doesn’t seem to occur to anyone that anything should ever fall.

For an hour or so I hang upstairs, taking advantage of the two-for-one deal on cocktails, before slipping down the narrow back stairway leading to the coffeehouse. The room is dark and L-shaped, the only light coming from behind the bar, the red glass candle holders on the tables, and the stage. Some of the other musicians on tonight’s bill are hanging around, slouched on the low benches, while mics are moved and cables are run. After my sound check I ask the lady at the door to add a few names to the comp list, and at the sound of my speaking voice, she laughs: “You’re an American! From the way you sing, I could’ve sworn you were a Brit.” I don’t know what that means, but apparently worn cowboy boots don’t communicate nationality the way they used to.

Somehow when the show starts, it gets even darker. The little tables fill up and the flames of the little candles quiver; but unlike their upstairs counterparts, these candles stay lit. This crowd wants music, not chit-chat. So here, I’ll follow their lead: I’ll spare you exhaustive descriptions of each of the four sets played that night. I’ll give you an idea and a link, and let these guys’ music do the rest.

Between Shannon and Mr. Dibb, I play a solo acoustic set. It has been over a week since I last performed, and looking out at the nondescript shadows and masses in front of me, dipping and swaying as I do, I remember that this is what I am supposed to do: I am supposed to wander down old alleys and stairwells and find a place to sing at the end. And I’m supposed, I suppose, to share it all with you.

… so keep an eye out for London video(s), and tales of Italia.