Unbound in the News

Published: October 10, 2013 in the Gloucester Daily Times by Gail McCarthy 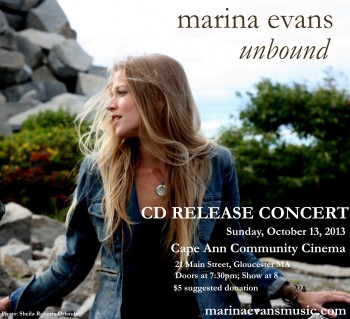 Cape Ann singer-songwriter Marina Evans will release her debut album “Unbound” at a special event on Sunday, Oct. 13, at the Cape Ann Community Cinema. The live performance will feature musicians from the North Shore as well as Bernardo Baglioni from Florence, Italy, where the album was recorded.

The 26-year-old began performing on Cape Ann almost a decade ago, and has developed her skills in her hometown and across the country. While studying abroad in Florence in 2008, she began collaborating with Florentine musicians.

“Just a few months ago, I wasn’t sure I would be able to pull this off. Funding a record is no joke,” she said in a statement. “But I was overwhelmed by support and encouragement from family, friends and fans — most of whom are right here on Cape Ann, and together, we all made it happen. So thank you. This record is for you —all of you.”

She launched a Kickstarter campaign in April to raise money to record the album. With more than 200 donors, she met her funding goal and began recording in May.